Can You Earn A Black Belt in A Year?

Well, it certainly doesn’t take 4 or 5 years to get a black belt, and that is in any martial art, Karate, Kung Fu, Taekwondo, or whatever.

I say this off the top because people think it does take that long, and this is one of those big lies that has been foisted upon the public.

Let me give you a few facts.

Chuck Norris earned his black belt in Tang Soo Do karate in about a year and a half.

Mike Stone, one of the best tournament fighters ever, and the fellow who taught Priscilla Presley Karate, earned his in something like 7 months.

So you can earn a black belt in karate pretty fast.

In fact, back in the sixties, it used to take about two years. That’s right. And fellows who were above average and dedicated could get there in about a year.

So what happened to make it longer and harder to get expert ranking in the martial arts?

Tracy’s Kenpo Karate hired a fellow from the Arthur Murray Dance Schools to put karate sales to contracts. The contracts were based on a four year program.

What this meant is that people were in contract, committed to a four year program of paying fees.

Can you spell ‘MONEY?’

It wasn’t long before every martial art jumped on the bandwagon.

All the talk of zen and noble warriors, and it was about a buck.

When I wrote ‘Outlaw Karate: the Secret of the One Year Black Belt,’ I had this in the back of my mind.

Me in 1974. Karate had just gone to contracts, but I could see how it used to be.

I had studied Kenpo, and knew how it was based upon selling a technique or two every week for for years.

I had studied classical karate, and I had seen how people loaded up the systems with all sorts of stuff, just to make it longer to teach so they could keep students.

I had also come across the facts I recited earlier, about it taking only a year or two, and I was interested in returning the art to that rate of training.

And, let me say something else, I saw that people who learned by those faster methods were better.

Spread out, which is to say dissipated, weakened, diluted.

Which is to say that because they hadn’t been sold a bill of goods, they were not confused or sidetracked in their training.

I actually discovered several different methods of getting a person to black belt in a year or less, and this in any art.

More important, I discovered ways of putting the martial arts to logic; a logic that is not inherent to the eastern methods of learning.

Outlaw Karate: The Secret of the One Year Black Belt, is one of those methods.

it is one of the better ones because it reduces karate training to the basics, to the methods used back in the sixties. No frills, just the hardest core techniques that worked in a fight, and which built a karate fighter out of anybody who was willing to work hard, and keep his eye on the target.

The name ‘Outlaw Karate’ comes from the fact that I thought I was going ‘outside’ the boundaries of Karate. Actually, I found out that I wasn’t, I was just returning to a harder time, a no nonsense time when people knew they could get where they were going by applying themselves.

A time not configured by ‘contracts’ and the desire to make as much money as you could from a student.

Outlaw Karate: The Secret of the One Year Black Belt, is only $15 on Amazon.

I suggest, if you are serious about Karate, and want to break away from the bushwah and the frippery of contract sales, that you get the book. Focus on one form every two months.

Schedule a couple of hours every night, and go for it.

Do the forms, get a partner and do the techniques, do the drills and freestyle.

At the end of a year you will be in the best shape of your life. Your reaction time will be non -existent and you will be moving intuitively.

Most important, you will be a living testament to the way the martial arts used to be. 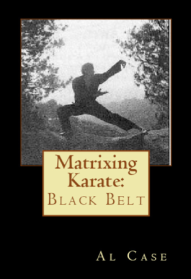 One of the many books I have written about how to earn a black belt in a faster period of time, and yet be a better black belt.

You will be a diehard fighter of unparalleled prowess and common sense.

You will find out truths about yourself that are available nowhere else in this culture, on this planet, anywhere.

That’s my Outlaw Karate Promise, and my guarantee that you can get a black belt in one year.

And I invite you to email me and ask ANY questions you wish, and to let me know how you are doing.

That’s Outlaw Karate: The Secret of the One Year Black Belt.

STUDENT WIN: Then I found your site. WHAT A RELIEF. I Feel very strongly that what I am learning is the real deal, and its so simple. I love how you make it so practical and yet traditional at the same time. You don’t bullshit, and you get straight to the point. I’ve been practicing the Outlaw Karate basics since I’ve ordered it, and let me just tell you, I was practicing the stances and my brother (for some reason he loves surprising me with his feet) did a high kick and I automatically went into right high block.I broke out into the hugest grin, I wish you could’ve been there. Your right, it is easy to pick up,

STUDENT WIN: I have for the past two years studied the OUTLAW KARATE course material and have instructed much of it to my students. THANK YOU for this great system. I wish I had studied under you many years ago, to have been able to have received at least my SHODAN in this system from you. It is indeed an incredible system…

ABOUT THE AUTHOR: Al Case began martial arts in 1967. Among the arts he has studied are Kenpo, Karate, Aikido, Wing Chun Gung Fu, Northern Shaolin Kung fu, Southern Shaolin Kung Fu, Tai Chi Chuan, Pa Kua Chang, and various weapons. He became a writer for the magazines in 1981, and had his own column in Inside Karate. He is the webmaster for MonsterMartialArts.com and several other martial arts related websites. He is the discoverer of Matrixing Martial Arts logic and Neutronics Martial Arts Philosophy. He can be reached through his websites.