People outside the martial arts are unaware of what I am going to tell you, except in the most shallow way, yet it is crucial to understanding the world.

The beginning martial artist, no matter if it is Karate or Kung fu or whatever, becomes aware of this datum quickly, and follows it to enlightenment. 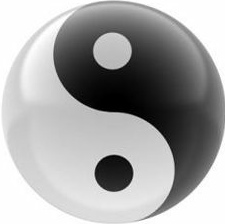 Two Sides to the Martial Arts!

There are two sides to everything.

First, there are the two sides of a technique. Karate or Kung Fu, you have to do it on both the right and the left sides.

Then, there are the two sides of the arm, your inward block goes to the right or the left, becoming an outward block. This grows to be two sides of the body, and one starts to explore the actual choice of techniques according to which way he decides to view an incoming force.

Time becomes before and after, an odd way of looking at two sides of time. This realization comes about the time of Black Belt, and the unfortunate fact is that this is where people usually end their questing. If they were to continue they would find some very interesting stuff.

An opponent becomes a mirror for oneself, and now one is deeply into the martial arts. Though becomes a projection mirrored by the opponent, and a way to determine motion before it happens.

At this point a martial artist has become a master, and thinks that is the end. But growing awareness need not end; there is no limit to the size of the human being.

Thus, if one was to actually make the right connections, he would see that the universe is a motor.

Right to left is a motor, and the tan tien can be activated by transferring energy between the two.

Body to planet is a motor, and energy can be created by the ton if one understands how that motor works.

Mind to reality is a motor, and the creation of futures is the product of that imagination.

But, we come back to the one simple fact: does the person actually seek? Ir is he just trying to beat people up, or be cool, or win trophies, or some other shallow motivation.

Mind you, these shallow motivations might be useful for getting a beginner onto the Path of the True Martial Art. But if not abandoned, then they simply become one more trap limiting ones exploration of the martial arts, and through the martial arts…the self.

Here is a great article which tells you about the actual procedure of seeking in the martial arts. You can also head over to the Church of Martial Arts and do some real seeking.