The Real Truth of Sanchin Kata

Sanchin is taught in many variations, the least modified version of which, appears to be the Pangainoon/Uechi-ryu variation.   This is because of all the Naha-te styles, Pangainoon has been “out of China” the least amount of time.  This also happens to be the version I know, so I will be comments from the point of view of how it was taught to me, and why it is that way. 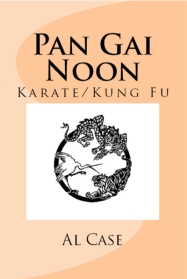 Release of NEW book on Pan Gai Noon! Click on the cover for more data.

Sanchin means three battles, those three battles are “order”, “form” and “breathing”.  These are the same 3 battles that you fight every time you learn a form.  You learn the order of the moves, how to do them properly, working out how they flow together (the form), and how to extract every ounce of internal and external power, both of which are enhanced with breathing.

Part of the proper form is “loose-tight”, which is quite the trick in Sanchin, since it is a dynamic tension form.  However, you have to loosen, your muscles to strike with force, to block with speed, and to tighten them as you are struck with the body checking.

Part of every form is to clear your mind and attempt to perform it with “mushin”, the “no-mind” of zen.

Truly Sanchin, is a very difficult form.  Pangainoon/Uechi-ryu, teaches it as the first form, and expects you to test on it at every belt, and to improve on it.  Other styles, such as Isshin-ryu, Goju-ryu, Kyokushin, and Okinawan Kenpo treat it as an advanced kata, in some cases styles have made it the shodan (blackbelt) kata.

It is interesting, that you also see the “aikido unbendable arm” as the guard, or Wing Chun stylists would recognize it as Tan-sao. I see many people holding their sanchin arms much lower than I was taught, Sensei always said your fingertips should be eye-level. My Wing Chun Sifu says the same thing about tan-sao, of course NOT holding the tan-sao at this level meant that Bruce Lee found it useless, so he through it out of JKD.

Just for a point of interest, here are a few different versions of the form.

I personally don’t believe that the unaltered white crane form was the one taught to the Okinawans, we see far too much tiger in the Okinawan karate versions, a greater emphasis on external power, tiger claw strikes etc.

Perhaps you have come across the old saying…’If you don’t know Sanchin, you don’t know Karate.’ It happens that this statement is fundamentally correct. It is correct because when done in the proper manner Sanchin kata results in a liberation of fighting energy beyond any form known.

The form came to Okinawan from China, where it was part of a system called Pan Gai Noon. While PGN is no longer in existence, that first kata is taught in such arts as Goju Ryu and Uechi ryu. It has also been altered and presented in arts such as Shotokan under the name Hangetsu.
The original martial arts pattern, as simple as it is, was taught over the course of years. Students would spend hours a night just walking, learning how to sink their weight, before they were shown even the most simple of hand technqiues. This fact, of being taught to sink the weight and stabilize the stance, should give even the dullest karate student a serious hint as to the correct way to execute the pattern.

In Uechi Ryu Sanchin, which is the first manifestation of this form beyond the Chinese Pan Gai Noon, the emphasis is on building muscular tension. Thus, the intent of the sanchin stance is changed from the creation (and dropping) of energy to the creation of muscle. Muscle is temporary compared to energy, and thus the form is changed and made less effective.

In Goju ryu Sanchin the purpose of the form is to learn proper breathing. Thus, the purpose of the form is to create the sensation of energy in the body through martial exercise, but without the emphasis on sinking the weight the reality of usable energy is forsaken. At this point one can see that the Sanchin form has been changed so much that it is but a shadow of what it should be…the story gets worse, however.

In Shotokan, and like systems of classical martial arts, the actual structure of the form has been rendered into simplistic self defense techniques. Mind, there is nothing wrong with this type of martial structure, except that it has nothing to so with the generation of serious intrinsic energy. The form in these later schools is called Hangetsu.

To be done correctly. this incredible form must be returned to simple concepts, and and taught simply. One must toss out concepts of breathing and muscularity and self defense except as they are drawn along by the sheer fact of energy generation. Thus, the simple instruction, “sink the weight, and ‘swirl’ the motion so that it creates a wave of energy which swirls inside the body and shoots out the arm,” is the only concept one should be working on.

Done with this easy instruct, for months and years, the generation of internal energy becomes real, and the internal energy becomes usable. Though the author would not propose combat as a solution, it must be remembered that Kanbun Uechi, the founder of Uechi ryu and a man who had studied the actual Sanchin in the manner recommended in this article, killed a man with one strike. No, don’t kill people, but do realize the true depth and power of the martial arts by practicing sanchin kata by sinking the weight and swirling the body so that energy may be developed and used.