Oops, did we do that?

There is a flaw in the Marine Corps Martial Arts Program (MCMAP), and it is a doozy. It’s a lollapalooza..it’s even a killer!

The flaw is very simple: to test for some of the belts you need to take non-martial arts related courses, and you need to be promoted. 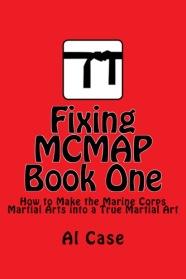 And the second part of this flaw: To be tested a person needs to be promoted.

On the surface these two items aren’t overly alarming, until you examine what actually happens.

These two things reserve the martial arts for the elite, upper echelon, and is thus not for the enlisted man.

Think about it. The boot gets a taste, then he has to jump through extra hoops to enhance his ability on the battlefield. Not fair.

And, here is the terrible news: the martial arts, and this goes for just about any martial art, Karate, Kung Fu, etc., and not just MCMAP, build a person up, and they increase his responsibility, and they make him a better leader, and they expand his moral compass, and they just make darn, better persons.

So with this fatal flaw the Marine Corps are actually stifling those gains, those abilities. In essence, by making a person take leadership courses and get promoted before they test them for advanced belts, they are limiting such things as responsibility and leadership.

It is so very odd that these people don’t understand that the martial arts inherently make better people.

And, one is forced to ask a rather brutal question: are the officers trying to stay elite at the cost of their troops?

And, here is the real kicker: If what I say here is true, then could it be that the Devil Dogs Fighting Discipline is not really a Martial Art? But just a sport designed to kill without the benefit of such things as increased ethics and responsibility!

Fortunately, there is good news here. There is a rumor that this flaw may have been set aside, either in part of whole, and this would be good news.

And, the fact that one can download MCMAP in it’s entirety does enable one to go through the program ‘unofficially’ on their own.

And, it is true that people who have studied disciplines such as Karate, Taekwondo, and so on, can be recognized for their achievement. The recognition comes late in the belt ranking system, more in the form of a recommendation for the military fighter to avail himself of other disciplines than MCMAP. But it is a start.