Karate Punch is famous for its power. Mas Oyama breaks bricks and kills bulls, Okinawan masters break rocks and disarm samurai, and so on. Good examples of Karate power.

And, to be truthful, many of these techniques are done by moving the weight forward, from shifting from the back stance to the front stance. There is a lot of power in the karate technique when you put your weight into it. 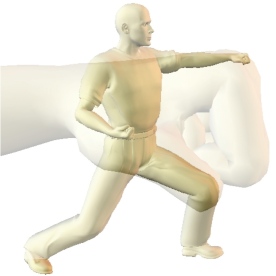 Use the whole body when you do a Karate punch.

But what if you are backing up, or otherwise don’t have the room? Well, you could use an elbow strike, nothing wrong with that, but what if, for whatever reason, you prefer a punch. Maybe you don’t want to get that close to a grappler, and a punch will kepp him back? In that case you want to sink your weight down the back leg and punch with the rear hand.

This is frowned upon by many classical martial artists, but it is a strong punch, and it has the added value of developing chi.

When you go to the front stance you tend to work on muscle and weight, and you are not afforded the chi power that you are really capable of.

When you Karate punch off the back leg you make the rear leg work harder, which makes the tan tien work harder (the tan tien is the energy generator just below the navel), which causes chi power to manifest and build.

Simply, doing a karate punch in this manner tends to cause one to be more aware of the body structure and what is happening, and awareness builds more chi power.

Interestingly, while I can punch hard with a front stance punch, I can’t do things like put out a candle from over a foot away. In the back stance I can. I’ll give you the link below if you want to see this.

For people who don’t understand the value of punching harder with less effort, I recommend you find the video of Bruce Lee doing the one inch punch.

And that is the reason one would karate punch off the back leg when doing the martial arts.

Here’s how to put a candle out with a karate punch from over foot away, and here are some free martial arts books.