I mean that literally, you can have a hard punch in days. The old body building method is called Dynamic Tension, and it was used by the old comic book guys like Charles Atlas and Joe Weider. It is actually still sold today. 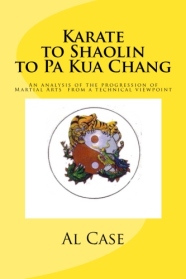 From hard style martial arts to soft style, this is how to build your chi power… 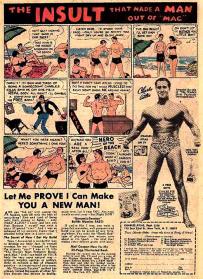 How does this compare to modern strength building martial arts exercises?

Interestingly, Chuck Atlas made his millions in the pages of comic books. He had ads that ran for years, and he even beat the Great Depression. His most famous ad, a bully kicking sand in a lads face at the beach, actually happened to him when he was a youth, and inspired him to create his world famous method for building muscles.

I was acutely aware of the comic book ads, liking comics and being a skinny weakling when I was young. I suppose, in some way, I answered the comic book ad when I took up the study of the martial arts. And, serendipity, amongst the forms I learned was one which dealt with Mr. Atlas’ form of shaping the body.

When you do the move, take a back stance and cross the wrists in front of you. Press wrist against wrist, and slowly slide the wrists past each other. Let the power build, then let the hands snap off each other and execute a punch.

It’s best to punch with the rear hand, and let the front hand come back across the chest. It is also good to simultaneously press your feet against one another in the back stance. Then, when you release the hands, you can release the stance and really cover ground.

The muscles tend to build fast, and you’ll notice an increase in strength I would say within seven days. Over time you will notice the working parts of your arms and legs are getting denser and better shaped. And, in conjunction with the thrusting forward of the whole body, you are going to have some kind of powerful strike.

Obviously, you can tailor this exercise for other body parts, other types of strikes and blocks, and your body should get in fantastic shape. I’ll tell you this, one look at your chiseled physique and nobody is going to try to kick sand in your face. And that is how an old body building method can give you a hard punch in literally days.

About the Author: Al Case began martial arts in 1967. He studied such arts as Kenpo, Karate, Wing Chun, Aikido, Norther Shaolin Kung Fu, Southern Shaolin Kung Fu, Tai Chi Chuan, Pa Ku Chang and various weapons. He became a writer for the martial arts magazines in 1981, and had his own column in Inside Karate. Check out his course on increasing Chi Power.

If you liked this martial arts article then you should subscribe in the sidebar.

Resistance training is an interesting concept that has been around for a long time, and especially in the martial arts. There are good sides to it, and bad. In this article I’m going to take this concept apart for better understanding.

The earliest example of resistance training I have seen was in the comic book ads. Charles Atlas, or one of those fellows, claimed that in 15 minutes a day you could build bulging muscles. The bulging muscles, of course, were necessary when you went to beat up that lout who kicked sand in your face and stole your girlfriend.

I remember a couple of the muscle building exercises from those long ago courses. One was to place your hands palm to palm and push one palm across the body, and then reverse the resistance and push the other way. Do it right and you could end up with a sweat, and even improvement on your muscular situation.

The only problem with this approach was more in the advertising than in the resistance exercises themselves. Muscles aren’t necessary to good self defense. In fact, in the extreme an improperly built or trained muscle can actual impede progress and function.

The second and more martial example of resistance training came from a kung fu form I learned. In the form the wrists were placed against one another on the centerline, and tension was built. When the tension reached a peak, you released the pressure and the punch shot out.

This exercise was dynamite, and increased speed and power GREATLY. I used to practice this form a lot, and even developed a few other techniques in which I could use this type of resistance training. In the end, I rubbed all the hairs off my wrists, and my punches got so they could go through anybody’s block.

Let me say one last thing on this subject of building big muscles for the martial arts. Big muscles are fine, but I prefer dense muscles. I prefer muscles that are thick, quick, unassuming, and can do the job ALL day long.

I want my punching muscles to be more like a marathoners legs, than Charles Atlas’s guns…I want muscles that don’t wear out, yet shoot the juice like Clint Eastwood’s big .45. 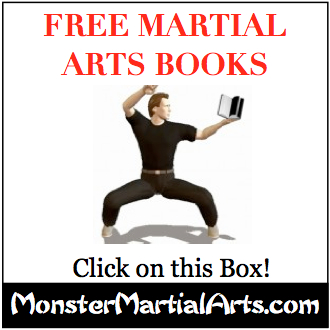 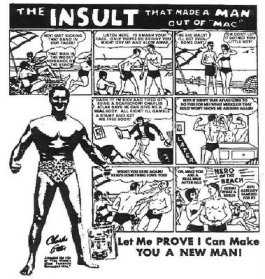 I ran across the concept of making the Hardest Punch some forty years ago. Haven’t seen anybody do it in a while, so I though I’d pass it on.

You cross the wrists, and one arm tries to go out while the other tries to come back. You let the tension, and then let the wrists slide until they finally snap apart.

I actually got it from a kung fu form that was spliced into the Kang Duk Won.

Now dynamic tension, just so there is no misunderstanding, is when you work muscles against one another to create strength. The old time body builders, like Charles Atlas, used to swear by it, and it does cause the body to bulk in the most pleasing and efficient way.

Adding a strike to the end creates speed and snap and puts that strength to work.

You can create other types of dynamic tension moves to make not just the hardest strike, but the hardest blocks, etc.

You know, it’s funny…but this little tip is merely icing. If you want the whole cake, and the beefsteak, too, come on over to Monster Martial arts. Check out The Punch. It’s a whole book on nothing but punching. You can’t help but learn when you have that much concentrated, to the point information.