When it came to Kung Fu, Stan was not a very coordinated fellow. He was over-large, maybe 6’ 3”, but he had one of those untidy bodies that carried a bit extra, uh, fat.

Fortunately, he was willing to work hard when it came to Kung Fu.

He worked, never missing a class, and though he wasn’t coordinated, and though he usually lost  when it came to free fighting, he kept working  hard. He was a second degree brown sash when he found out the truth of his art.

He was a salesman, and he was in New York City for a training seminar. After the seminar he and a few of the fellows he was with were walking down the street, and they decided to go into a bar.

Stan and the fellows each made their order. Suddenly, a thick fellow with a mean face shoved Stan aside and bellied up to the bar.

Stan held onto his drink and said, “Hey!”

The guy turned, grinned, and launched a gnarly fist.

It was a hard right fist to the head, and no doubt the bully boy had managed to mangle a few fellows with it. What he hadn’t figured on, however, was Stan’s training in Kung Fu.

Stan raised a left high block and then shot out his own punch. One punch, right to the jaw, and the fellow fell all the way down. I mean, he was cutting zzzs worse than Rip Winkle!

Stan, confused by the whole thing, surprised by his own reaction, left the bar.

Yes, it is good to be fast, but what is more important is to use classical  training to get the energy to explode from the center of your body, what is commonly referred to as the ‘Dan Tien.’ When the energy explodes, in spite of how slow you might be when on the mat, you’re going to have major speed.

Enough speed to make a block and counter work no matter how ‘clumsy’ you might feel on the mat.

The body is an interesting little put together. Most people think they need large muscles to to knock somebody out, have to have the hard belly, the whole thing. But that is a false image.

What people really need to learn is a knowledge of how the body works. And not just the muscles, but the energy that makes those muscles do their thing.

Classical Kung Fu imparts that knowledge. You get the tight belly and the cannon ball biceps, that is just the result of good exercise, but you get the martial smarts, too.

I don’t care if you are a student of Wing Chun or Preying Mantis or whatever. Good Kung Fu students, in a good Kung Fu style, learn about the energy that motivates the muscles.

You know, if you’re really interested in good kung fu, you should check out the Shaolin Butterfly. Top notch power.

Yeah! What IS the Best Martial Art?

I have had people ask, and tell, and discuss what is the best martial art since I first began my studies. There is a fascination with being the best, and, to tell the truth, I can’t fault it. 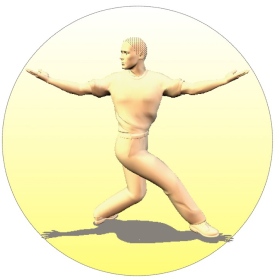 Come on! All of you! At once! I know the best martial art!

Heck, if you don’t believe in something, why are you doing it? Right?

So when somebody goes on a jag about some art being better than another, I just smile and go along with it.

Heck, the Ultimate Fighting Championships were started to answer this question.  Every week people from different arts would get in the ring and discuss the matter. Kung Fu went against Jeet Kune Do. boxing went against Jujitsu. Muay Thai went against Karate, and you know what we all found out?

Brazilian Jujitsu was the best! Couldn’t be beaten, and…and time passed, and suddenly Ju Jitsu was no longer the best.

So maybe kung fu works for you, or Karate, or some Mixed Martial Arts dog.

And, who really cares?

When I watch the UFC these days it is merely for the spectacle, to see a couple of grown men punch the daylights out of each other, to choke each other, to bleed a little bit, and then stand up and shake hands.

Isn’t that better than war?

And the real best art these days, as demonstrated by the gladiators of the UFC, is a generic thing that is unique to the fellow who studies it. Some guy focuses on kung fu drills, speeds up his hands, and he becomes best for a while.

Another guy works on his kicks, or his takedowns, and suddenly we have a new ‘best martial art’ in town.

But, as I said, what you work on is what you need, and the art you study is the best martial art for you, and there ain’t nothing wrong with that.