This is the Martial Art that Survives

I read the so called martial arts that survivalists put forth, and I have to chuckle. Mostly, they are garbage. 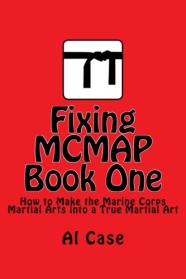 But the real truth is that if you want to survive you have to train for it. You have to get the discipline, get the conditioning, and teach yourself a real martial arts.

A real martial art that has been designed by warriors for warriors.

Not an art designed for children.

The United States Marines designed a good martial art. Those guys train themselves to kill. They are dedicated to the mission to stay alive.

So learning the martial art that they practice is a step towards serious survival.

Their art is called MCMAP. You can get if for free on the net if you look around.

There is one problem with it, however. It is designed for boots. For guys who don’t know how to fight, Some of the training methods are simple, for large numbers of people who can’t always count.

So I wrote ‘Fixing MCMAP.’

Fixing MCMAP fixes all the mistakes the military made, and changes their not bad martial art into a true martial art.

It aligns the training, takes out confusions between empty hand fighting and weapons fighting, puts the science of hte martial arts into the training drills, gives a series of freestye drills so that the individual can REALLY learn how to fight.

And how to survive.

Check out ‘Fixing MCMAP,’ at https://marinecorpsmartialarts.wordpress.com