Bagua Zhang founder Dong Hai Chuan was most likely a Shaolin Kung Fu stylist. Like many martial artists of his day, he wandered the land, looking for employment, and looking for opportunities to improve his Chinese martial art.

He would look for chances to use his Gung Fu as a bodyguard, fighting off bandits with spear and sword and hand. 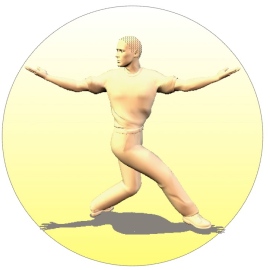 One must wonder then, how he became involved with a band of religious zealots.

It is doubtful whether the monks of this obscure and unnamed sect could beat him in a hand to hand fight, but they had to have something, or he wouldn’t have stopped his travels for eleven years and studied with them.

For the first nine years, it is reported, Dong Hai Chuan walked in circles, possibly chanting religious phrases. He walked and he walked, and one can imagine the unspooling in his mind. It is invariable that his martial arts would start to manifest.

Around and around, making kung fu motions with his hands, bending his legs into kung fu stances, and imagining how walking the circle could enable him to move better through hordes of bandits.

After nine years of doing these kung fu movements, which would become the basis for his Bagua Zhang martial art, he told the monks that he felt that the trees were bending after him, actually chasing him.

Trees Chasing a human being? Now how could that be?

Have you ever met eyes with somebody sitting on a bus? They are in travel, in a different world, and for a moment the spirits see each other. Across separate universes they bridge.

Or, have you ever played in a soccer match, run next to somebody, and been immersed in your own separate communication with that person, created a world that is different, that seems stable while the ‘real’ universe of the crowd and the stands passes by?

The question here, however, is not about Dong Hai Chuan, it is about you. Can you use Bagua Zhang (also called Pa Kua Chang), and walk in a circle so long that the universe bends to your will?

Can you go around in circles and learn the fascinating hand movements of Bagua Zhang until a horde of attackers is confused by your simple walking the circle self defense?

An interesting question, this Bagua Zhang thing, for it opens the door to a new universe, and a new you.

Here’s another great article about a Bagua Zhang universe. Monster Martial Arts has a great Bagua online martial arts course you can do.