Extreme Martial Arts are a top Google search these days. People, especially those interested in MMA training, are going outside the traditional martial arts academy to learn martial arts training methods that are ever more brutal.

The funny thing is that if they studied their history, immersed themselves in the classical martial arts, they would find all the brutality they would ever want. 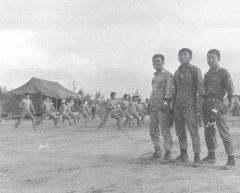 If you want extreme martial arts you need look no further than taekwondo some sixty tears ago. I am speaking, of course, of the early taekwondo–Korean Karate, actually– taught in Kwans during the Korean War.

To begin with, Korea is a brutal place. Cold sweeps down from Siberia and the Arctic, monsoons sweep across the peninsular country, and during the summer there is blood boiling heat.

Add to that, a war, and you have the most brutal conditions possible for learning your basic self defense.

Imagine standing on a dojo floor. It is built of rough planks that are filled with splinters, and you have bare feet. There is no heater, and you must rely on body movement to stay warm. Then, of course, you have the sound of distant gunfire.

‘But Sensei,’ asks one of the younger students, one who has just begun this extreme martial arts training and who doesn’t know better. ‘The shells are getting closer! Shouldn’t we be leaving?’

There are snickers through the class, and the Instructor asks for quiet. Then he turns to the younger student. ‘We are a hard target, and those shell bursts aren’t even a mile away. When they get to a half mile, then we leave. Now, take your mind off the coming death by concentrating on your forms!’

And, when the front is a half mile off, the old instructor tells the students to lift up the floorboards and leave.

Lift up the floorboards?

Yes. There was a shortage of all materials, and a dojo floor, even one rough cut and filled with splinters, is of extreme worth.

Dutifully, the students put on their shoes (snow filled from sitting on the front stoop) and carry the floor of the dojo away. They will hide it, and when the fighting has moved on, they will reassembled and learn martial arts again.

Now, as I said, people are looking for more extreme martial arts. They want fitness and self defense, and they tend to look towards Mixed Martial Arts Training methods, and to forget classical martial arts like Kung Fu and Taekwondo and karate.

But beyond the extreme martial arts youtube supplies and the octagon brings, there are the movements honed during war most violent and brutal. Remember that, the next time you put on the pads and drink the designer water; remember, the next time you want something that makes hard the body even as it uplifts the spirit; remember, even as you merely sweat what only feels like blood and guts.

Outlaw Karate is a wonderful example of an extreme martial art that remembers the brutality of its beginnings.