Learning how to progress from Karate freestyle to kung fu freestyle in the martial arts is most interesting. Most people don’t understand the bits and pieces, and so make it a long, drawn out thing. It doesn’t have to be. It can be quick. 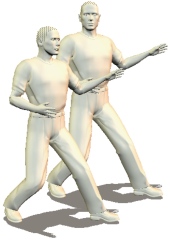 Martial Art Testing by video is the latest rage.

The first thing is to get the gross motions down. I use Karate freestyle training for this. The attack comes form a distance, and so the defender is able to see it and build a response. Start slow, build response, get faster. It’s pretty straight forward. My next step, in this thing of martial arts freestyle tends to be different.

In a fight, distance collapses. So karate freestyle will only work for a while, then the distance has collapsed, and one has to enter the next stage of fighting. Here is where we slide into kung fu freestyle.

In doing the Rolling Fists video I taught a fellow over three months. These are ten minute segments, a total of three hours of instruction, where I take him through each of the pieces, then slide him through the methods by which one shifts distances, enters other freestyle methods, and so on.

The result is his karate freestyle opens up the fight, then he enters what I call ‘the funnel.’ In the funnel he uses rolling fists to blast away, and then slides the attacker into a different mode.

Talk about shock and awe.

You start simple with karate fighting, and by the time the attacker figures it out, you change into kung fu freestyle, then =when he thinks he’s got that figured out, you are already shifting into another one.

And you can move back, out of the funnel, anytime you want.

What this means is that every time the attacker thinks he’s got something, you change. And I tell you this…in a fight, the fellow who changes, who controls the changes, is going to win. He doesn’t have to be stronger, or even faster, he just has to change better.

Anyway, that’s the overview of what my basic freestyle methods are. I’ve had great response to the Rolling Fists DVD, which I released last Friday, and it is obvious that some eyes are being opened. If you don’t know the Rolling Fists freestyle method you are seriously missing something good. The method moves you into close quarters at increased efficiency, and it creates a higher degree of intuition.

You see, most people are stuck in the karate mode. It is effective, builds strong bodies twelve ways, and I love it. But, that is only about one sixth of the fighting distances, and you have to know them all if you are going to stand a chance of winning.

3 thoughts on “Going from Karate Freestyle to Kung Fu Freestyle”