Kung Fu Kick Harder than your opponent by following these seven simple tricks. Most Karate students you see, whether they are doing karate kicks,or taekwondo kicks, don’t really understand the physics necessary to do a proper leg kick. These poor martial arts students are merely told to kick air, or kick a bag, and that’s the extent of the Kung Fu lesson. 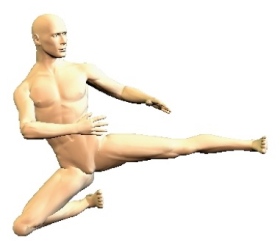 First, you must raise the knee when you Karate kick. This insures that the foot travels into the target on a straight line, and doesn’t arc up and slide or catch toe. It’s like hitting a nail with a hammer, you have to make sure the force travels straight into the board.

The second martial arts training tip do is tilt the hips slightly. You don’t have to tilt them a whole heck of a lot, but they have to tilt sufficient to create a good connection between tan tien and foot. This makes sure that the whole weight of the body is put into the taekwondo kick.

Third simple tip is that you must turn the hips slightly, making sure that the body gets behind the kick. This not only makes your Kung Fu kick harder, but also gives a bit of extension to the kick. If you don’t turn the hips you might find yourself a little jammed up, and your kicks might even be negated.

Fourth easy training tip is to turn the foot you are standing on to the proper angle. This doesn’t have to be a large turn (though it can be), but it must be done so that the whole body works as one solid unit. This is actually critical when doing a karate kick or a kung fu kick, because using the body as one unit delivers more intention into the hard kick.

Fifth you must sink your weight down the support leg and into the ground. Sinking your weight while doing a hard kick will firmly attach you to the ground. The body, after all, is nothing but a motor, and an efficient motor must be bolted down.

Sixth, you must bend the support leg while you sink the weight. People who straighten up the support leg are exploding energy out the support leg, which is the opposite direct energy should take. Energy should be going the other way, sending a ‘tractor beam’ down the leg to grip the ground and make the body solid and stable.

Seventh and last training tip, relax the upper body; relax all of the body except the foot being used. People get obsessed with rigid energy, but this is a tremendous waste of chi power. If one wants to do a Taekwondo kick harder, or a good karate kick or kung fu kick, they must learn how to use energy in the body, and energy travels easiest through that which is empty.