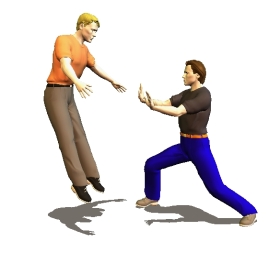 There will be preferences if you want to learn Martial Art, but there are also a couple of things that are fairly obvious, and that we will be able to agree on. Interestingly, I came across this data many years ago, and have used it myself. It deals with analyzing the value of media in transmitting data.

The worst method for absorption of data is the movies or TV. This is because the martial art techniques that you will see on the screen, whether it is the art of Bruce Lee, Jet Li, or whoever, has been altered for the camera. Yes, it may look good, but stuntmen and camera cuts are making it look good.

Almost as bad as movies, and it might even be considered a toss up with these two, is the internet. While there can be gems out there, the dreck is abysmal. Dial into the internet for the purpose of actually trying to learn something (as opposed to just surfing for fun) and you dial into a common brain that doesn’t know any better, pseudo experts, massive amounts of data with no real instruction or even organization of data, what’s cool, advertising that hasn’t and can’t be tested for worth, and so on.

The third weakest method would be to read magazines. Now, this is not to be discounted, it does give you an overall viewpoint of what’s happening–and not just in the traditional arts–and can afford a good education as to what is out there. Good writing and the eye of the magazine to find out what the reader is really interested in, and the tendency of the worthwhile ads to stay, makes this a viable source of finding out about different martial arts.

Fourth weakest would be martial arts DVDs. Now, I should say weakest, but third strongest, because one can dial into a specific art, delve into that art in detail, and really get some great instruction. Honestly, it’s a toss up between this and the next item on the list, almost a tie, but I settled on the order you see because there are just so many bad DVDs out there–it’s just too easy to string some fighting techniques together, slap a pseudo scientific label on it, and use internet marketing to blast it past common sense.

Second best,status, when it comes to the learning procedure goes to martial arts books. With books you might not get the visual, but if you have any instruction in a dojo, books will work. Furthermore, you can get the most detail, the best theory, the most thought out concepts in books–and if you can get a DVD to go along with it then you really have something.

The best method for learning the the combat discipline is to take a martial arts class at a good dojo, one where they teach not just the blood and guts, but the heart and soul. You’ll find friendships that mean something, systems of combat that have been proven over thousands of years, and some pretty darned good times. Add to that that you can ask a question about the most minute detail at any time, and the worth of this method is undeniable. People study according to their opportunity and means, thus, none of the methods I have mentioned can be totally discounted. And, the smart student will do a mix and match and educate himself so that there are no weaknesses in his arts.