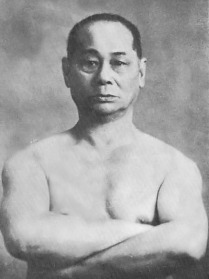 There’s going to be a lot of opinions on who was the toughest Master of Karate, but Motobu Chōki certainly deserves consideration. He was one of the first instructors to teach Karate outside of Okinawa, and he is responsible for the fame and notoriety that resulted in the spread of Karate through Japan. Interestingly, this ‘George Washington’ of Karate is not a commonly known figure.

Motobu was born in 1870, and descended from the royal lineage of Okinawa. As the third son, he was actually not supposed to study Karate, but that seemed to make him want to study all the more. He spent much time hitting the makiwara, lifting heavy objects, and training however he could.

Eventually, because of his tremendous agility, people called him Motobu the Monkey. He also was looked on as a fierce, though unschooled (brutal?) street fighter. Though he was held in low esteem for his street fighting, instructors took him on as a student, presumably because of lineage.

His instructors read like a Who’s Who of early Okinawa. Among the masters who taught him were Ankō Itosu, Sōkon Matsumura, Sakuma Pechin, Kōsaku Matsumora, and Tokumine Pechin. This would be like somebody who studied under Morihei Uyeshiba, Bruce Lee, Gichin Funakoshi, and Ed Parker.

Motobu eventually made his way to Japan, where some Karate instructors were earning a living teaching the art to the Japanese. Motobu being a rough character, and not succeeding at business, was talked into signing up for a fight in a ‘Judo v Boxing’ match. He was fifty-two years old the night he entered that contest, and he was about to change Karate for all time.

His opponent is said to have been a strongman from some western country. Strong or not, Motobu is said to have moved forward with a single punch to put the fellow down for the count. People were astonished at this incredible win, and newspapers gave the story coverage, and here is where the tale takes an odd twist.

The newspapers didn’t have a picture of Motobu, so they published the only image they did have, which was of a young fellow name of Gichin Funokoshi. That’s right, Motobu knocked the strongman out, but his fellow countryman, and competitor, Gichin Funokoshi, got the credit. Thus, Shotokan was spread around the world, and Motobu went home.

Motobu Chōki, brawler and roughneck, is as responsible for the spread of Karate as anyone, and he was a true master. He was a karate technician of tremendous punching power, and he founded the Motobu Ryu Karate school. People may not know much about him, but he is definitely in the running for toughest Karate Master of all time.

If you would like to know more about Karate, and a revolutionary way of teaching it, visit Monster Martial Arts