I had a fellow write me the other day, and he told me of a fellow who won’t let his daughter go on a date until she is a black belt in karate. Well, I have to tell you, there is brilliance in this idea. No more rape, because when this girl says no…she means NO! 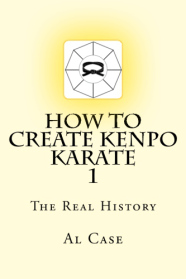 Now, there is humor here, I know, but there is something else, too. What most people don’t know is that once you get past the violence and fighting in such arts as kenpo or tae kwon do, there is moral certitude. You know the difference between right and wrong.

Oh, I know there have been exceptions to this fact, that there have been martial arts instructors who have committed crimes, but they are just that…the exception. And, to be honest, they probably weren’t studying the martial arts, they were probably just studying how to beat people up. They were thugs, polite but thugs, in uniform, and that’s all they were.

In ancient times people who taught karate or kung fu or other arts used to screen their students to make sure no idiots could infect the art. In modern times, however, the only screening process is whether a person has money. And, the sad truth is that most schools use the fact of fighting to try to sell the art.

The True Art has fighting in it, but it is only by the way. The True Art is actually an education in physics, it requires immense patience and attention to detail, things which are not normal to the thuggish personality. And, in the end, the True Art teaches one how to see things before they happen.

Oh, not some silly psychic stuff, but the ability to observe such things as appearance, body motion, and what these factors indicate are going to happen. Once little Janey has done sufficient art, and I mean the True Art, not just the fighting art, she gains the ability to see people for what they are. She will be much less prone to being fooled by a wolf in cheap…uh, sheep clothing.

So, make your daughter get her black belt in Karate or tae kwon do, or judo or ninjitsu, or whatever, before she goes on a date, but make sure she learns from a school that has some steel in the cement. Make sure that the instructor is smiling and joking, and not some lantern jawed bully talking about the need to hit first and talk later. Make sure that there is a bit of moral certitude, the ability to know right from wrong, as well as good, firm martial knowledge, in the fellow who is going to give your daughter the ability to protect herself throughout her life.

The best way to train your children is at home, yourself, using the Black Belt Course form MonsterMartialArts.com

1 thought on “She Needs a Black Belt Before She Goes Out on a Date!”